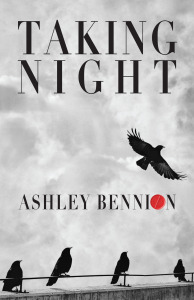 Happy Friday everyone! To kick off this first weekend of December we have a special treat for you: a fun interview with indie author Ashley Bennion! Ashley has recently self-pubbed her first Young Adult (YA) novel, a light dystopian called TAKING NIGHT, available on Amazon. So without further ado…

1) Tell us a bit about what Taking Night is about.

To me, Taking Night is about family and relationships set to the backdrop of a dangerous future world where nothing is at it seems. Plot-wise, it follows Shay Andrews who lives in a time where dreaming has stopped, but she starts dreaming again and then has to question everything she’s ever been taught, by the people she trusts most (her parents).

There are plenty of twists and turns so I think anyone who likes a page-turner will like this book! But it skews more towards dystopian YA and a bit of sci-fi.

3) What inspired you to write the book?

So, so many things inspired me to write this book. I’ve been a professional writer for 10-years and always wanted to write a novel but it wasn’t until recently that I felt I had the time (with two kids at home that seems funny to write) and an idea. The idea actually came to me while I was in the chair at the dentist – I’m terrified of the dentist – and wished I could be put to sleep for the cleaning but then how would I really know what had happened?

4) Do you have any writing quirks?

I’m not sure if this is a quirk, but I have to have music on to write (with lyrics) and music on to edit (without lyrics).

5) What made you decide to self-pub and how did you find the process?

I tried the traditional route for a few months and received the same consistent feedback: Good story, has potential, but the genre is flooded and we can’t take a chance on a debut author. I could have stayed at it, I know people who spend years doing that, but that’s not me. I wanted to move forward and I didn’t want to shelve something I’d worked so hard on, so decided to do it myself. The process has been interesting. I’ve learned a lot about myself (I’m impatient and want things to happen like, now) and really bad at formatting!

6) What would you say to writers who are struggling to find agents or traditional publishing contracts?

I would say you have to ask yourself what you want out of this. Is it a publishing contract with a publisher? Then keep at it. The industry is changing and it’s quite subjective so someone out there might buy your book. But if what you want is to get your book out there now, self-publishing is a great, relatively easy way to do that. With much higher royalties! And don’t forget, even with a publishing contract you’re still doing a lot of marketing yourself.

7) What are some of your favourite authors/books and why?

The funny thing is I am a big Canadian Lit fan – Atwood, Findley, Ondaatje are my favourites. I actually don’t read a lot of YA but of course loved The Hunger Games.

8) What was the most difficult part of the whole process and what was something you found unexpectedly easy?

That’s a good question! I had a number of close calls; publishers who liked the book but just not enough to buy it, or agents who really reluctantly turned it down because of the genre. So that part was tough in the beginning, getting so close is almost harder than being turned down outright. And I have to say, something that was unexpectedly easy was the actual writing part – I loved every minute of it.

Yes! Absolutely. I am so totally obsessed with my characters that I’m definitely not ready to say goodbye quite yet. I haven’t decided if this will be a two-part series or three, but I will definitely be done a second book next year. Stay tuned!

It Should Have Been a #GoodDay Blog Tour