I’m so excited to announce SECRETS OF THE SANDS, a thrilling adventure series set in Ancient Egypt that showcases genuine contemporary artifacts. The first book, THE LOST SCROLL OF THE PHYSICIAN, comes out Summer 2019. I’ve been working on this project since 2015 and was fortunate to receive grants from the Ontario Arts Council which both motivated and allowed me to keep writing.

There is something magical about this series and I hope that kids and adults alike will love it as much as I do.

Here’s a look at the first book:

SECRETS OF THE SANDS, BOOK ONE: THE LOST SCROLL OF THE PHYSICIAN
It has been an entire moon since the fire—since Sesha and her little brother Ky lost their mother and father and found themselves orphans on the perilous streets of Thebes. Having only narrowly escaped the blaze with their own lives, the siblings struggle to survive, charming snakes and stealing goods from distracted vendors. In an unfortunate brush with the law, Sesha is forced to reveal their lineage as the children of the late royal physician, returning them to the palace and their once home. But Sesha knows the gods were not to blame for her parents’ deaths—someone betrayed them, perhaps even the Pharaoh himself.

Sesha’s father was working on transcribing an ancient papyrus with far reaching consequences for Egypt—and the rest of the world. A priceless scroll, believed to have been written by the Great Imhotep, the document has the power to shift the balance in an approaching war with the neighbouring kingdom of Hyksos; clear or condemn the royal family in the murder of her parents; and save her brother from a looming—and potentially fatal—illness. Vowing to the gods to discover the truth, Sesha engages in a clandestine search for the hidden scroll. But she’s not alone.

As the only girl enrolled in studies at the temple, safety is a mirage that constantly has Sesha looking over her shoulder. Among conspiracy at court, treachery at the temple, famine in the fields, and whispers of war, Sesha puts her father’s snake charming lessons to use in taming the nest of royal vipers. Using her knowledge of reading and writing, her talent for healing, her quick thinking, and the help of her fellow scribes and a certain princess, Sesha may just find the sacred text before it falls into the wrong hands—and time runs out to cure her brother.

Full of intrigue and adventure, Sevigny’s middle grade debut is sure to do for ancient history what Riordan has done for mythology—ignite passionate readers of all ages.

The Edwin Smith Medical Papyrus (the “lost scroll” Sesha seeks) is a manual of military surgery and the oldest known treatise on trauma. It was discovered by tomb robbers and sold into the hands of Edwin Smith, a rare antiquities dealer in the late 1800’s, whose daughter later recognized its extreme importance and donated it the New York Museum of Medicine in the early 1900’s.

The scroll is believed to be dated to the Second Intermediate Period and is actually a copy of a much older medical document attributed to the Great Imhotep, Egypt’s first renowned physician, scribe, Grand Vizier and High Priest (among many other things). The copy is believed to have written by two scribes, with the second making small additions which are incomplete in some sections, as if the scribe were interrupted mid-transcription. Not only is the scroll one of the world’s most priceless artifacts, it is also the first document that demonstrates the Egyptians had a rational and scientific approach to medicine, rather than relying solely on magic and superstition. 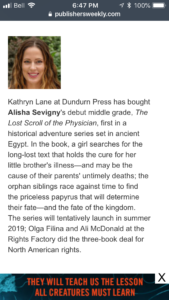 The Second Intermediate Period is one of the most obscure periods of Ancient Egyptian history when the country fell into disarray, invaded by foreigners (the Hyksos) who gained control over the Nile Delta and ruled from the port city of Avaris (modern Tell el Dab’a). Egyptians viewed this brief period as a blight on a glorious history, but it was actually thanks to the warrior Hyksos (who—for the most part—held an uneasy truce with Thebes), that new advancements in weaponry and military procedures were introduced to the Egyptians, allowing them to eventually take back their lands, heralding in the extraordinary era of the New Kingdom. Even now, new research is being carried out and there are proponents of several theories regarding this tumultuous time, as the world’s renowned Egyptologists attempt to unlock the mysteries of the past and decipher its stories.

This is one of them…

Interview with Author P.H. Oliver of THE GYNESAURS